Welcome to the Hageningen Trams Tutorial page. Here you can find some basic instructions on how to drive the trams in Hageningen which use a Drive-on-Sight system (ROZ – Rijden-op-Zicht). 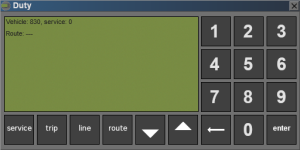 The Duty selector as seen before setting up

If you're interested in driving activities only, you may skip this part. However, for Explore Mode it's essential.

In Beta 3.17, you will find a new side menu called Duty. This allows you to set a route for networks without traffic control, like with the trams in Hageningen. With that system, the vehicle communicates with the various points along the line which change the tracks to guide the vehicle to the correct direction. 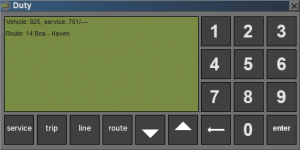 The Duty selector as seen after setting up

In contrast to previous networks you're probably used to, the CVL doesn't work here (except for a small number of points). In order to setup the route for a line, you have to do the following:

The Duty Selector is now set up and it should look like in the picture on the right. Aside from when you are in the small number of points mentioned before which we cover later on this tutorial, you are now good to go.

There are two types of signals in the Hageningen tram network: Route Signals and Point Signals.

These are the signals found on that small number of points. Those can be controlled manually via the CVL (using the RWI/RWO codes). When running under the Duty Selector, most of them are being activated automatically when you are near them while others require you press the departure button; by default assigned to Tab

Point signals, in contrast to Route Signals, show you the state/direction of a point. It doesn't include any protection nor does it block other trains from coming, for example, towards you in a collision path using the same track :) The signals cannot be manually controlled though the CVL. If for some reason the signal you want to pass is not clear, you can manually change the point using the WSO command in the CVL (see CVL Tutorial) and then proceed at a slow speed.