The collection in this download includes the follwing trains:

These trains run on pneumatic tires. For information on this: https://en.wikipedia.org/wiki/Rubber-tyred_metro

Important to know; with this system, the conventional steel rails are still in place. The trains also still have normal train wheels, which are used to guide the train through switches, for emergencies (in case of the flat pneumatic tire, the conventional train wheel is backup), and to support the train in the depot/workshop. Although running these trains on normal tracks is possible, if it happens it is only done at shunting speeds and not in passenger service.

The 3D model of the Santiago NS93 and MP68 was created by Supertrain_fan. The model has been made functional, and several variants added, by Sjoerd Ydema.

In the Rijndam network, the rubber tired metros can be used on the Airport Shuttle Service (the 2-car Lausanne metro, or the 3-car Paris metros). Starting in Rijndam 2022 v1.5, line M6 is also converted for rubber tired metro's (all versions, including the 8-car Santiago NS93).

The number display on the front of the train can display 4 digits; the first two are the line number, the second two are the service number. Both have a range of 01-99 (so you can show 0101 to 9999). If you do not set anything, the display remains empty. 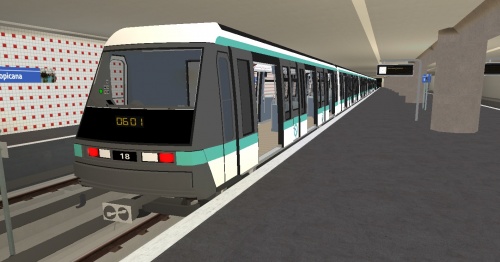 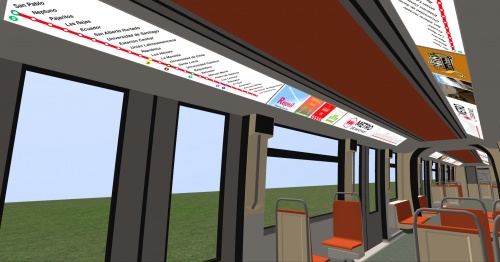 Simvliet line diagrams are under line numbers 13 and 14.

Line number 13 was chosen as all metros on lines A, B en C in Simvliet run under service numbers in he 300-series (and "03" was already used for Rijndam). So when setting the line number to 13, you will get the line diagrams for Simvliet lines A/B/C in the interior of the train. Same for line D in Hageningen; set the line display to 14.

Repaintable add banners inside the vehicles

In the automatic variants, MP89 CA and Be 8/8 TL, the driver controls can be opened by going to the cabview positions and using Shift+X.

The Santiago metro's have yellow lights in between the headlights. These are used to signal the train is running out-of-service (fixed lights), or to signal that the train is making shunting movements (flashing lights).

The Paris and Lausanne automatic metro's have white lights in between the headlights. These are used to signal the train is operated manually.

Coupling to other units

As these trains are generally the same length of the platforms on the lines ther are used on, the couplers are for emergency situations only, and therefore they are not equipped with components to couple two trains electrically. Coupled use in passenger service is therefore not possible.

However, in the simulation the fictional 3-car Paris versions have been fitted with a 'full' coupler, so these can be used coupled in passenger service.

Also the Lausanne Be 8/8 TL, which has a fold-away coupler of the type more commonly found on trams; due to it's short length and the generally long platforms in the simulator, these have also been given an electric component (located under the mechanical coupler) to make them usable in coupled passenger service.