The PCC (Presidents' Conference Committee Car) is a type of tram designed by the Presidents' Conference Committee, a group of transit operators in the United States and Canada.
The PCC also became popular in other city's around the world, including The Hague in the Netherlands. However, in Europe the original design was altered in most city's it was used in; for example, in The Hague the car body was narrowed, rear passenger doors were added to improve passenger flow at tramstops, and after the first series, the small American windows were replaced by larger ones, providing a better view for the passengers. And most notably; they never used trolley's, only pantographs.

The TTC in Toronto purchased 745 PCC streetcars in all, making it the largest PCC fleet in North America. Of these 745, 317 were air-electric (with air-compressor to operate the brakes and doors) and 428 all-electric (no air-compressor).

The Metrosimulator model finds it's origin in the 3D Sketchup model by Demilune on 3D Warehouse.
The model has had the following modifications:

The couplers can be used to run the PCC in multi-unit mode in passenger service. The TTC used to do this on the "Bloor streetcar" line (which has now been replaced by a subway line), were a maximum of two units were coupled together. In the simulation, you can ofcourse couple more together, but in the Toronto map, the platforms are not long enough for more then two PCC's coupled together.

Operations in the simulator


On the Metrosimulator model, the trolley pole has replaced by a pantograph; the simulator does not facilitate the use of a trolley.

As with all Metrosimulator rolling stock (tram & metro), the ATB train protection system has been installed. When the ATB transmits a maximum speed of 10 km/h, you may not pass "S" signs next to the track, which indicate the fixed block separations. In the PCC, in this case a red indicator marked "STOP" will activate next to the speedometer. When this indicator turns off again, you may pass the S-sign into the next block. You will encounter this situation when the block in front of you is occupied by another vehicle, or if a path has not been set in the CVL screen yet.

Be aware the destination display will probably not work in routes older then Rijndam 2022 v1.2. 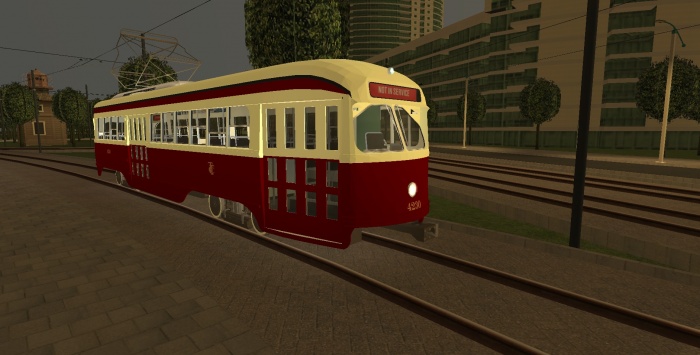