The Stadsgewestelijk Materieel or SGM (English - Suburban Equipment or City Regional rolling stock) was an electric multiple unit (EMU) train type that was operated by the Dutch railway company Nederlandse Spoorwegen. They were built from 1975 to 1983 by Talbot and retired from service between 2018 and 2021.

The SGM was the first train type in the Netherlands to be specified for frequent local train operation, since the Spoorslag '70 timetable introduced the concept of a strict separation of all-stop local trains and skip-stop express trains in order to improve punctuality and speed as well as to attract more passengers to rail. The SGM trains had fast acceleration as distances between stations were short, so they needed to be able to speed up and brake quickly. Originally the intend was to provide through services on the Amsterdam Metro network, which would also require third rail power pickups. However, this was never realised.

The first series delivered to the Dutch Railways (Nederlandse Spoorwegen / NS) were 15 two-car units (numbered 2001-2015), which had no gangway between both coaches; as the idea was to use them on short routes, this feature was deemed unnecessary). A few years later, additional trainsets were ordered (with gangway between the coaches, as they were now also planning to use them on longer routes), and middle coaches to lengthen them to three-car units. In the end, there were 30 two-car units and 45 three-car units. Mirrors were fitted on the right side of the driver cabin to allow for one-man operation (so the driver could see whether it was safe to close the doors).

Main use for these trains was on the "Hofpleinlijn" (Hofsquare line, The Hague Central Station to Rotterdam Hofplein) and the "Zoetermeer Stadslijn" (Zoetermeer cityline), starting at The Hague Central Station, proceding to Zoetermeer and going around a loop with 12 stations, some just 500 meters apart, alternating clockwise and anticlockwise). They also became the standard trains on the Rotterdam to Hoek van Holland railway, also known as the "Hoekselijn". (Note; these three railways have now all been converted to lighrail operation; the Hofpleinlijn and Hoekselijn are now part of the Rotterdam metro network, and the Zoetermeer Stadslijn is now part of the The Hague tram network.) They were also used in all-stop services on the rest of the Dutch railway network, mostly in the western part of the country.

In 1997, all 30 two-car trains were rebranded "Citypendel". They were painted all yellow, got a more open interior and lost their first class compartment. They were used for the Hofpleinlijn and Zoetermeer Stadslijn.

Between 2003 and 2006, all three-car trains were modernised (changing the type-name from SGM to SGMm), giving them a new blue-white-yellow livery, a new interior, mirrors on both sides, and digital destination displays. In the period 2007-2009, the two-car units (now no longer needed on the Hofpleinlijn and Zoetermeer Stadslijn, as both where now being converted to lightrail) got the same modernisation.

With the start of the timetable of 2022 in december 2021, all remaining trains of this type were taken out of service, and transported to recycling. Two of the two-car units remain; the 2133 has been donated to the railway museum in Utrecht, and the 2134 is now property of ProRail (the company in charge of Dutch railway infrastructure).

For Metrosimulator, the following variants are available:

You can find the texture file to repaint the repaintable variant under "Data/RijndamRail/Textures". The repaint template is made in the "NS Flow" livery, which is currently being applied to trains undergoing revisions, and which the SGMm trains might also have gotten, had they stayed in service long enough to undergo another large revision. 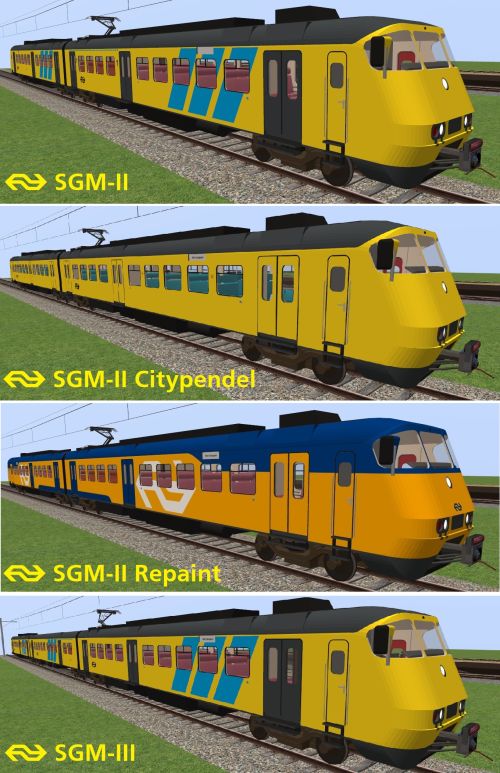 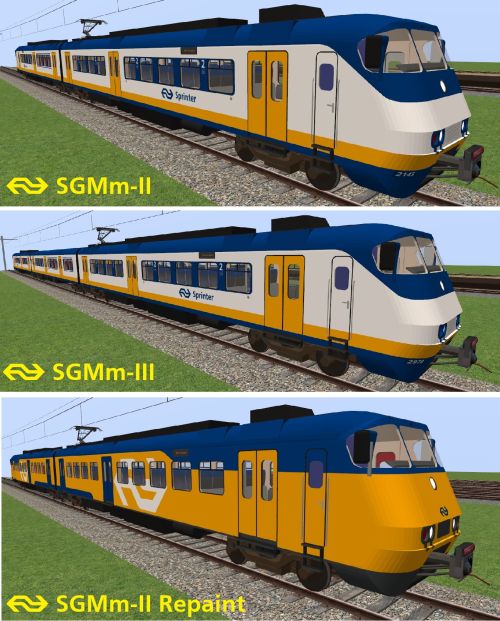 The mirrors open with the doors, but as Metrosimulator doesn't allow for it, they are not reflective.

You can place a train containing the ICM train your acitivity by using the following lines in your ACT file: