The NZH "Blue tram network" had a series of standard gauge tramlines and meter-gauge lines. The standard gauge network had the following connections:

All NZH tram services ended november 1961, when bus services replaced the trams (for example the line The Hague - Leiden stil runs today as busline 45), and the tracks were removed in a matter of weeks.

This is the local tram which ran in Haarlem, and later (when the Haarlem tram network was closed) in Leiden. In Leiden, they ran on the line Leiden Rijndijk - Oegstgeest (local service).

In order to use this tramcar in your own activities, you can use these codeline:

You can make your own repaints of the addsigns in the folder "Data\TramNL\Textures".

The A300-series tram is based on the Sketchup model bij Johannes K. on 3D Warehouse (link below). Modified/animated for use in the simulator by Sjoerd Ydema. https://3dwarehouse.sketchup.com/model/b23fe91b-275a-454a-9e9f-d22ae5223527/Tram-Motorwagon-A327

These are the NZH "Budapesters" (named after the city where they were build) of the 'low 500 series' (501-512). These trams were in use between 1924 and 1958 on the standard gauge network of the NZH (in full; NZHTM, Noord-Zuid Hollandse Tramweg Maatschappij).

The trams of this series consisted of a (bi-directional) motorcar (A500) and one or two trailercars (B500). They were build with the local service Scheveningen - Voorburg in mind, but they where also seen on the rest of the network, even though their relatively low maximum speed (50 km/h) made them less suitable for the The Hague - Leiden line.

The 1930 motorcars and trailercars were the second series the NZH ordered of this type. They feature a different roofline on the fronts, different windows onm the sides, and add banners. The 1950 trailercars are the modified version of the 1930 traiolercars; in 1950, they were fitted with driver positions on one side.

The tram is based on the Sketchup model bij Johannes K. on 3D Warehouse (link below). Modified/animated for use in the simulator by Sjoerd Ydema.

These trams can run in service in Metrosimulator on all tramlines equiped with overhead wires, except those which are under ZUB train protection (you could, but shouldn't). The trams are bi-directional, but you can not operate the tgram from the B500 trailercar. So if you take trailercars with you, you need to shunt around them at the end of the line (if the infrastructure situation allows for that), or just use lines with turning loops / triangles.

From the cab 1 or 2 positions in the trailercar (the ones without full driving position), you can also control the motorcar, but only at limited speed (5 km/h). This is to simulate shunting the tram backwards; in reality, a conductor would then stand in this position, giving the driver in the motorcar handsignals and/or soundsignals on what to do. As the driver does not have a clear view on the tracks (the trailercar is in the way), the speed remains low. This function also enables the AI to shunt the tram backwards if needed, for example to enter the tramdepot stabling tracks.

In reality, these vehicles do not have any ATP system. In order to run on the Rijndam and Toronto tram networks (where ATB has been installed as a requirement of the simulator), the ATB system is installed on these trams. However, the maximum speed enforcement has been removed from it, so you are responsible yourself for a safe trip! As there is also no speed indication for the driver, this operates totally in the background. Therefore, in order to drive on the Rijndam and Toronto networks yourself, do not pass S-signs along the line if you are not sure the track ahead (to the next S-sign) is clear. Check the CVL screen when you are not sure. If you enter an occupied section of track, you will loose your trainnumber in the CVL.

Example of how to place an NZH tram in an activity:

This was the first articulated tram of the Netherlands. The NZH ordered this tram for the Leiden - Haarlem route in 1932, as in the city center of Haarlem, the municipality restricted tramcars to a maximum of 10 meters in length. Therefore, the NZH came up with a 2-section tram, of which each section was just under 10 meters, and each section having a different car number. Therefore they were officially two coupled tramcars, each following the 10 meter rule. After the Leiden - Haarlem line was closed (january 1949), the A600 series was used on the line The Hague - Leiden - Katwijk/Noordwijk. 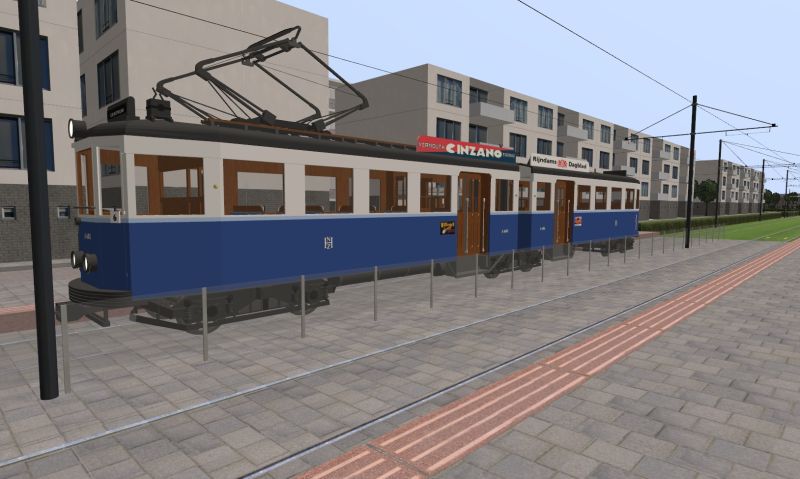 The tram is based on the Sketchup model bij Johannes K. on 3D Warehouse (link below). Modified/animated for use in the simulator by Sjoerd Ydema.

You can make your own repaints of the addsigns in the folder "Data\TramNL\Textures".

To use them in your own activities, you can use this code:

These are work-trams of the NZH. 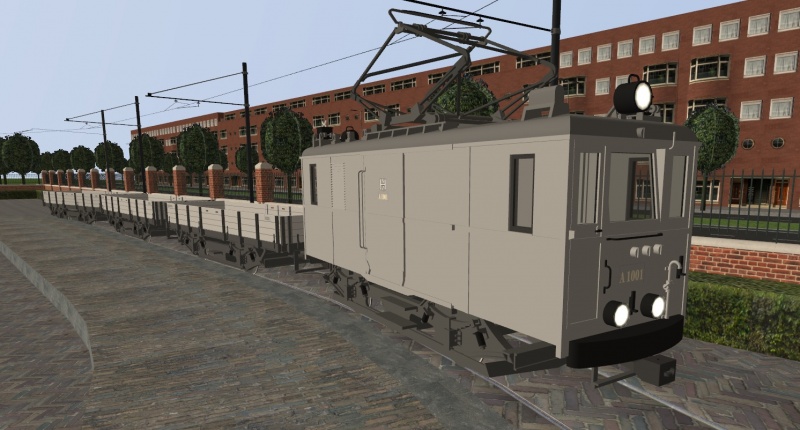 Note: the C121, C122 and C123 weigh 4 tons (with a carrying capacity of 10 tons) and do not brake. So if you have all three coupled behind your tram, this will reduce your braking power. Drive carefully! For coupling, you need a speed at contact of 5 km/h (slower may not work).

The tram is based on the Sketchup model bij Arend on 3D Warehouse (link below). Modified/animated for use in the simulator by Sjoerd Ydema.

In order to use these tramcars in your own activities, you can use these codelines: