A typical second generation train consists of three carriages; either three motorcars, or two motorcars with a trailer in between. During quiet times, a two-car train (consisting of two motorcars) can also be used. As each motorcar has only one driver cab, at least two of them have to be coupled back to back.

The third generation trains consist of a multi-articulated 4-car trainset, which has an overall length that is roughly the same as a second generation 3-car train. In the begin, they will be fitted with a driver position. However, after all second generations trains have been withdrawn, platform edge doors will be installed on all 15 stations, and the trains will be converted (removal of the driver positions) for full automatic service.

In the Simulator - 2nd generation trains

The trains should be coupled in 2 or 3 car formations, with the last motorcar reversed at the end (in a 3-car formation, couple either a trailercar, or another motorcar, in the middle). The back of the motorcar and both ends of the trailercar are also equipped with 'cabview' positions. From these positions, it is possible to open/close the emergency door at the end of the carriage.

From the back end of the motorcar, it is also possible to make shunt-movements at slow speed.

The Glasgow subway train will be available in three liveries; the famous all-orange livery, a later maroon-crème livery, and the livery which is currently in use (see image on the right. This livery is repaintable).

All three liveries are available for the entire series (101-133 for the motorcars, 201-208 for the trailercars). When using multiple liveries in the same activity, it is therefore advisable to fix the numbers for each train you put into the activity, as the AI of the depot might get confused if there are multiple vehicles with the same number present.

In order to use the vehicles in your own activities, you can use these codelines (M for motorcar, T for trailercar):

In the Simulator - 3rd generation trains 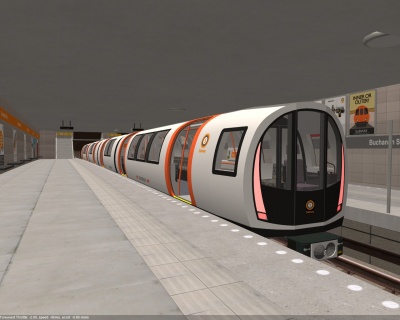 This is a recreation of the 3rd generation Glasgow subway trains, which enter service in 2020, replacing the 2nd generation trains. There are 17 units available.

The driverless version is also available. In the simulation, they are numbered as the 400-series, in order to avoid train number conflicts if you use both versions of the train at the same time (as this may cause problems when using the depot in activities).

On the Glasgow network, the passenger compartment screens will automatically show the next station when you are on the line. If you want, you can override this using the destination display feature, but this will disable the automatic display. To re-enable automatic "next station" display; simply set the destination back to its first position. This feature does NOT work on other networks in the simulator, as it requires special signals from the CVL system unique to the Glasgow network.

In order to use the vehicles in your own activities, you can use these codelines:

In the Simulator - Maintenance train

The SPT has a number of battery powered locomotives, and carriages for maintenance work in the tunnels which were created based on the undercarriages from the first generation trains. There are 3 battery operated locomotives available in the simulator: L1, L2 and L3.

Locomotive L1 has the Clayton logo (company that build the locomotive for Glasgow), and is fitted with Scharfenberg couplers, to connect with the 3rd generation trains.

Locomotives L2 and L3 have Wedgelock couplers, to connect with the maintenance trailers, and 2nd generation trains.

In order to use these trains on non-electrified tracks, they had to be defined as diesel locomotives (just without the diesel sounds). So to use them:

There is one type of maintenance trailer available. This is used to transport materials, including new rails, into the tunnels. The model has a few functions. To acces these, get on the trailer by clicking on the model, or on its icon on the bottom of the screen.

In order to use the vehicles in your own activities, you can use these codelines: