The Alstom Citadis 302/402 is a standardized modular design tram which has been sold to many cities worldwide. Important selling point by Alstom are the designs for the shape of the front/rear ends of the vehicles, which are redesigned for each city. This way, each city gets a vehicle with a unique appearance, at minimal added investments.
The difference between the 302 and 402 models is the length; the 402 is two modules longer (7 modules instead of 5, resting on 4 two-axle trucks instead of 3).

The original 3D models have been made by Seht13 on 3D Warehause. Refitting and animating them for use in the simulator, including building the interiors, was done by Sjoerd Ydema.

The package contains the following models: 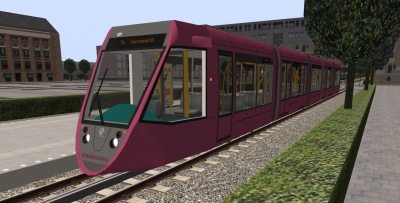 In Metrosimulator, the vehicles are equipped with both train protection systems (LZB/ATB and ZUB), so you can use them on the entire tram networks(*). An indicator on the control panel shows which system is active.
(*)Be aware that only the Tours and Reims Citadis trams can be used on APS fitted tracks.

You can couple two vehicles together; the couplers will appear automatically when the connection is made. In reality, the couplers are only used as an emergency function, to tow away a defective vehicle. In Metrosimulator however, multi-unit operation is possible.

The Tours and Reims Citadis trams are equiped with APS (Alimentation Par le Sol; power from the ground), a third rail system for trams. In order to use this functionality in the simulator, a new line T4 (Garenmarkt - Winkelcentrum Bogaard) has been added into Rijndam 2022 v1.3; the new section, starting at Centraal Station, is fitted with the APS system (be aware; trams that are not equipped for APS will not be able to function on this line).