The Canadian Light Rail Vehicle (CLRV) is a tram used by the Toronto Transit Commission (TTC). They have been the prevalent rolling stock on the Toronto tram system since the late 1970s. Two variants have been produced and are in use: the standard, single-module CLRV and the longer, articulated, double-module "Articulated Light Rail Vehicle" (ALRV). 196 CLRV's have been built. The first six CLRV cars (4000–4005) were manufactured by SIG of Zurich, Switzerland, and used as prototypes for the Urban Transportation Development Corporation (UTDC) (now Bombardier) to manufacture subsequent CLRVs at the Thunder Bay works of Hawker Siddeley Canada (today also part of Bombardier).
Of the ALRV, one prototype (4200) and 52 service-trams (4201-4252) have been built. The prototype did run in passenger service, but was withdrawn in 1983.


On the Metrosimulator model, the trolley pole has been replaced by a pantograph, as the simulator does not support the use of a trolley.

The models are equipped with two passenger views;
6 - Middle of the tram; open area next to the doors
7 - Back seats

Known 'problem'; the doors open (rotating) to the outside, are lower than the platform height of tram stops in Rijndam. Therefore, the doors will hit the platforms. A few platforms in Rijndam 2022 (v1.2) have been lowered a bit for this reason, but not all.

The CLRV trams did have couplings when they where delivered to the TTC, but they were never used in regular passenger service (only on special occasions). Eventually, to improve safety, they where removed in 1988. Now, if a defective unit needs to be towed away, an emergency coupling is used. This coupling, however, is not suitable for passenger service. In the simulation, you can couple two units together in the normal way. When the connection is made, the emergency coupling will appear. The ALRV's were never fitted with (normal) couplings, except for the prototype. 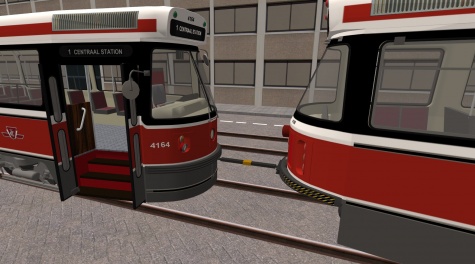