The Amsterdam M5 metro's make up a fleet of 28 six-car metro trains for the Amsterdam metro, which was supplied by the French manufacturer Alstom between 2012 and 2015. They are based on the Alstom Metropolis platform.

The collection in this download includes the following trains:

With the A/B/C separate carriages, you can make any train length you want (3-car minimum). A full train consists of two three-car sets (numbered as such) coupled back-to-back; A-B-C-C-B-A. A train must be at least 3 carriages long, as the end carriages are not motorized.

The texture files for the "GVB / R-NET" and "RET / R-NET" variants can be found in the folder \Data\Amsterdam\textures. If you want to put something else on the train, add-banners for example, you can do it here (suggestion; make a backup first). The same goes for the line number display and the line diagrams.

The 3D model for the Amsterdam M5 was created in Sketchup by user Supertrain_fan. The model has been transfered to the simulator and animated/programmed by Sjoerd Ydema.

These trains can run in service in Metrosimulator on all lines equiped with 3rd rail power supply.

The trains have been equiped with a small shunting pantograph, which is only ment for slow speed shunting in the Diemen depot of the Amsterdam metro network. This pantograph has a maximum range of 4,7 meters above the track. As most overhead wires in Metrosimulator are at 5 meters, this isn't very usefull. However, in the network "Rijndam Metro 2022", the overhead wires at depot "Bergenseweg" (connected to track 3 at Station Westplein) have been re-installed so the M5 metro can use them. 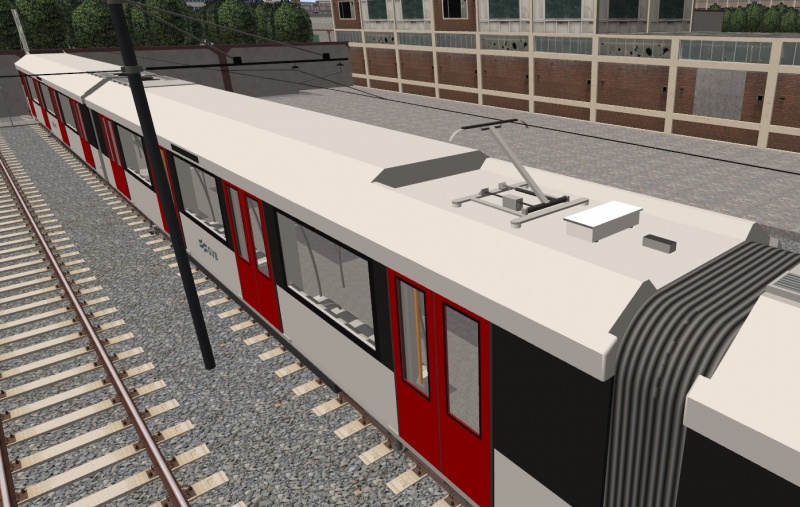 The fictional RET version has a full service pantograph, as most lines on the Rotterdam network have overhead wire sections. So if the RET actually ordered this type of train, it would have been equiped with full pantographs to use in passsenger service. Therefore, you can use this version of the train in the simulator on all overhead wired lines too. The RET version is also just 3 carriages long; you can use it in service as single or coupled units. 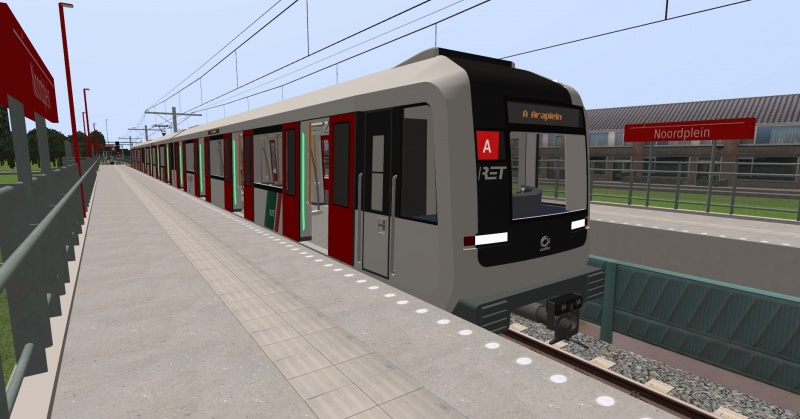 The following automatic train protection (ATP) systems have been installed:

The train will automatically select the correct system when you spawn it in one of the networks. Switch-overs between ATB and ZUB will happen automatically as you transition between systems, just like on the RET SG3 trains.

(The user-operable ATP selector switch option has not been installed, as it blocks the automatic ATB-ZUB vv transitions, and the AI doesn't operate this switch.)

The Amsterdam M5 metro's have internal light signalling on both sides of the doors. 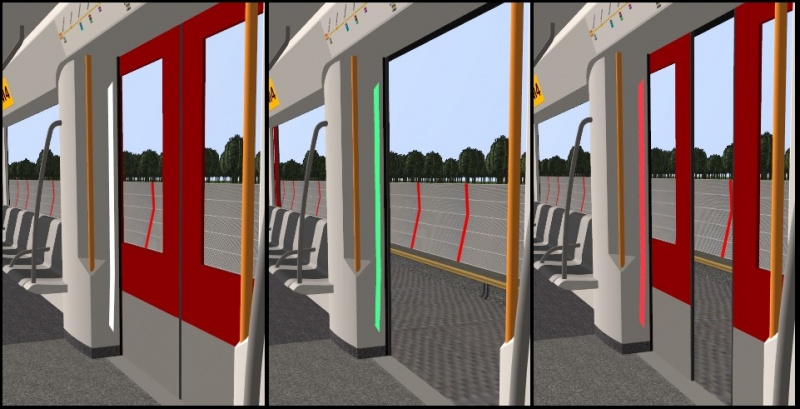 The white lights (indicating the platform side on the next station) can be operated manually with the [ and ] keys. The green and red lights operate automatically with the opening/closing of the doors.

Make sure to deactivate the white lights again (use the same key, or \ ) before you close the doors, or the light will turn white again once the doors are closed.

The indication of the next platfom side will also be shown on the center screen in the driver cabin.

Example of how to place a M5 train in an Simvliet activity:

And for two coupled trainsets of the RET version:

Note: The "scrollsign3", for the line number displays / line diagrams, must be set for each carriage individually if you want the simulator to show these upon loading the activity. You can always also set them manually once the simulation has started (in which case it effects the complete train at once). In the above example, "13" results in "C".