Amsterdam 11G and 12G trams (with the low-floor middle carriage). These trams have been in service since 1990, and have recently been withdrawn (replaced by what Amsterdam calls the 15G, which is an Urbos100 tram from CAF). The outside of the tram is an object from 3D warehouse by Trainboy2004. The inside is all new by me.

The 11G series is bi-directional, and was mostly used on tramline 5 to Amstelveen, as the end of the line there was never equiped with a turning loop. The 12G series is unidirectional, and was mostly used on lines 16 and 24, although in the last few years they have been seen on other lines, after the GVB changed it's network (which included ending service on line 16).

The following versions are available:

The 1990 version is equiped with the then used ticket validators, belonging to the "Strippenkaart" system. These validators stamped a time and farezone marking on your ticket. In the simulation, these machines will show "buiten dienst" ("out of service") when you have deactivated the vehicle. When the cab in 'on', the validators will show a green symbol to show they are ready to be used.

The 2005 and 2015 versions are equiped with the current OV-Chipcard devices, for contactless check-in and check-out.

The repaintable version is delivered in the colors of the Rotterdam RET. You can repaint this tram if you like; the textures are in the folder "Data\TramNL\Textures".

These trams can run in service in Metrosimulator on all tramlines equiped with overhead wires, except those which are under ZUB train protection. Be aware to only use the 12G tram on lines equiped with turning loops / triangles.

In reality, these vehicles do not have any ATP system. In order to run on the Rijndam and Toronto tram networks (where ATB has been installed as a requirement of the simulator), the ATB system is installed on these trams. However, the maximum speed enforcement has been removed from it, so you are responsible yourself for a safe trip! When running on tracks with ATB, the maximum speed it send to your vehicle is shown in the speedometer with a small blue arrow (but its not enforced). Just remember to STOP before an S-sign along the track when the ATB signal shows "10 km/h".

When running "On Sight" (when no ATB is available), no allowed speed is shown in the digital display

In the folder "\Data\TramNL\textures\Repaint backups" you will find a few repaints / templates which you can use as a basis to create your own repaints. Main purpose for this folder is to store/backup repaints you are not using at the moment. Only the files directly onder "\Data\TramNL\textures\" are used by the simulator. So put the repaint you whish to use on this location under the correct name. 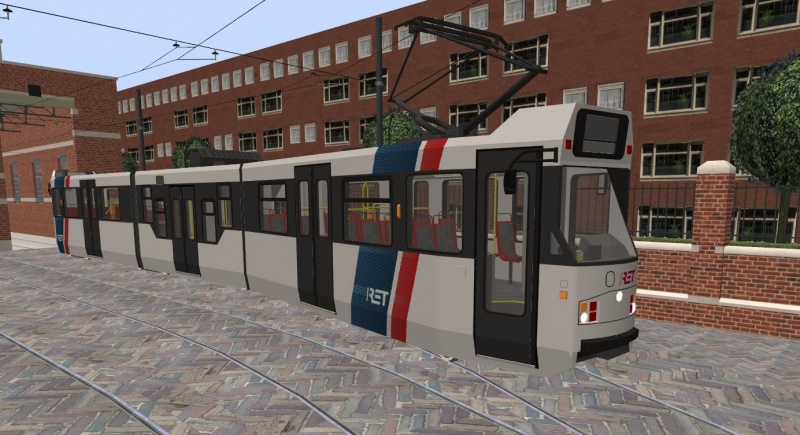 Example of how to place an 11G or 12G tram in an activity: