The KTM Citylink tram is a fictional regional tram, based on the Russian KTM31 tram and inspired by the Spanish FGV 4100 series Citylink tram (which runs a lightrail service between Alicante and Benidorm). Built by Vossloh. 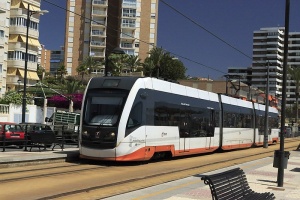 In effect, this KTM Citylink tram shows what the rolling stock on the Alicante-Benidorm line would have looked like, had the FGV ordered it with UKVZ (Oest-Katavskiy Vagonstroitelniy Zavod) instead of Vossloh.

The KTM Citylink tram has a low floor around the doors, and a slightly higher floor in the seating areas. The maximum speed has been raised to 100 km/h, and it has been equipped with ZUB train protection. The couplers are of the Scharfenberg type; this way, it is possible to use RET rolling stock (like a locomotive or a metro) to easily tow away a defective unit.

The Metrosimulator KTM Citylink uses the color scheme of R-net. They would probably have been painted in this scheme, if they were implemented in the Netherlands.


You can repaint these trams by altering the texture files in the folder "Data/RijndamRail/textures".