will this map be available sometime, or is it already downloadable?
A German Train Simulator Gamer!

It's work in progress.

(For those of you who have not seen it yet; rolling stock release on last page; http://sim.bemined.nl/forum/viewtopic.p ... =70#p25800)
CEO of the Rijndam Electrical Transport company

i have download this file ( http://sim.bemined.nl/wiki/LU2009) and when i select activitie, then he will startup and then he closed the program.
Top

Sjoerd, i found a bug with the 2009 stock, at terminuses (such as Tropica, Blaak and Airport) the train doesn't turn the cab back on to depart again in activities.
CEO of Metro Sim Walks, Simvliet and Rijndam Walks

The M7 and the Museumline are driving on the left

The 2009 stock is a pretty long train. And in the simulator, trains running on AI have the habit of stopping just short of the stopmarker (and not exactly at the marker). I have tested at Station Blaak on line M6; The train stopped just short of the stopmarker, and due to its length, the AI-marker on the other end was now located under the cab.... And so, it will not activate the train (the train must have entirely past the AI-marker, or that marker can't do its work to activate the train's AI).
The same thing happens at the airport (I just fixed this here by adding another stopmarker a little furter along the platform, so the train will clear the AI-marker at the other end (Rijndam 2022 v1.4)).

Here is the situation with the markers made visible (at Station Blaak); 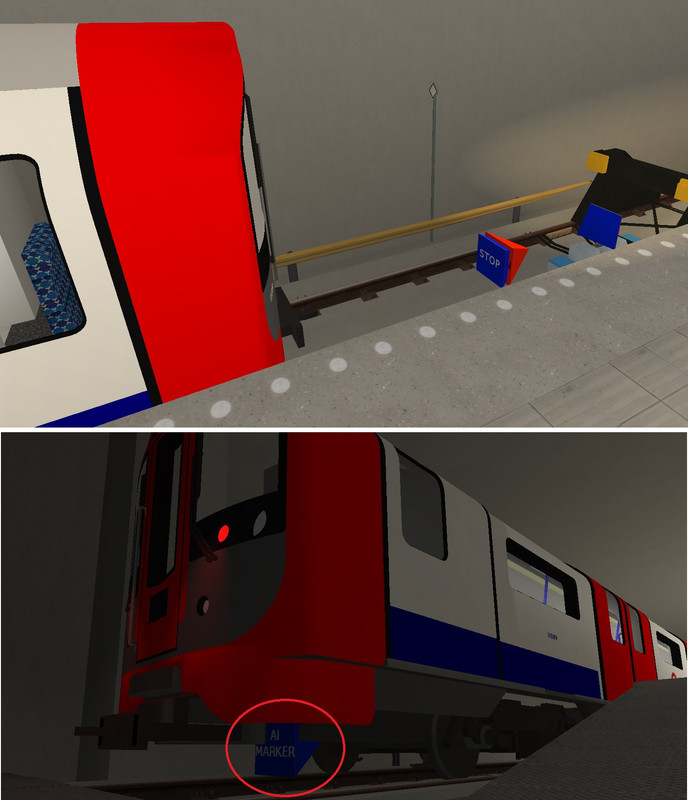 I would suggest, for now, using the shorter LU2009_DE.xml (the 4-car version with two driver cabs) instead of the 8-car A+B combination, for trains driven bij the AI in activities.
CEO of the Rijndam Electrical Transport company

The DE is so cute ngl but it does ruin the point of me making a Victoria line 8 car style but I see where your coming from so I'll look into it
CEO of Metro Sim Walks, Simvliet and Rijndam Walks

When come the map out??
Hi
Top

Which one?
CEO of Metro Sim Walks, Simvliet and Rijndam Walks